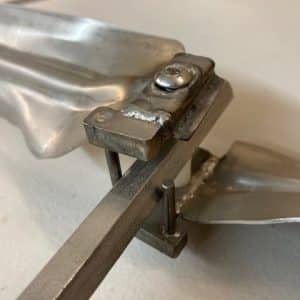 Even Mix™ Extra Set Folding Blades – M-0-00-0-16-04-2-1 If you need some extra mixing action then you can add an extra set of blades to your IBC or Drum mixer. They can be positioned anywhere on the hex shaft and are identical to the ones already with the mixer. Superior Mixing – Mixes vertically and horizontally Powerful – Tested up to 50,000 cps Non-Reactive – Made of 316 Stainless Steel Orders are shipped within 5 business days. Please email us if you need it sooner.
Features
Product Specs
Documents
Features
Product Specs
Documents
$250.00

If you need some extra mixing action then you can add an extra set of Even Mix™ Folding Blades to your IBC or Drum mixer. They can be positioned anywhere on the hex shaft and are identical to the ones already with the mixer.

The Even Mix™ Folding Blades add to the 3D mixing action created by our patented blades.

As they’re re-useable, an intermediate bulk container (IBC, for those in-the-know) can see many liquids that need proper mixing in only a brief period of time. While other mixer companies may claim that their blades can mix paints, food, chemicals, pharmaceuticals, and more the most efficiently, the newest item in our family of products will blow other tote mixers out of the water and IBC.

Quality and handling are first and foremost the top priorities our management team has when developing new mixing blades and other mixing products. So, of course we have your mixing success in mind when creating our IBC tote mixer. Along with a superior mixing capability, our tote mixer for IBCs and large plastic totes has patented technology other companies cannot offer.

With the Even Mix™ Folding Blades utilized as a part of the tote mixer’s design, you’ll see liquids undergo vertical mixing like they never have before. Because of the patented technology we use for the IBC tote mixer, the contents of the intermediate bulk container will be evenly mixed. Why is that? Our mixed flow blade that has been designed for mixing everything from food to chemicals and it reflects NASA based engineering for optimum performance while mixing.  Yes, it is rocket science!

While the Even Mix™ IBC mixer won’t spin fast enough to propel you into outer space, it does have a 160-RPM at 90 PSI. The other heavy-duty powers this mixing blade has include a 6/10 HP air motor and it is completely flexible. For the operator of this IBC tote mixer, the motor can be moved easily from tote to tote or the operator can use several Even Mix™ tote mixers with a single motor. Our management team had everyone’s mixing needs in mind when designing this advanced tool.

What’s more, our IBC tote mixer not only has easy handling for the operator, but it features easy installation for those rookie operators. The whole tote mixer unit weighs only nine pounds, and can be installed in an intermediate bulk container within seconds. All that is required of the operator is to simply insert the blade and screw in the attached lid of the IBC. Plus, our IBC tote mixer is easily inserted in a six-inch opening of an intermediate bulk container — so even the smallest of openings can use our newest mixing product. Unlike other companies in the mixing industry, there is no extra hardware required with the Even Mix™ tote mixer.  We only use the cap for the 6″ top bung.  The mixer and the electric or air motor are balanced so they don’t need a large apparatus to hold them.

If reliable performance is something that you’re searching for, look no further.  We have tested the Even Mix™ IBC Tote Mixer up to 50,000 cps.  It’s mixed Corn Gluten that had settled for about a year, that’s right a sludge the consistency of mustard was mixed throughout a large IBC in about 3 minutes.  Bring it on, we can mix it!

As this is the industry’s only mixed flow blade, whatever liquids require vertical mixing, you’ll have a blade that can fold into open and closed positions for optimum levels of mixing. We proudly manufacture all of our mixing pieces — including the mixed flow blade and the air motor — in the United States. Not only will the Even Mix™ tote mixer blow competitors’ comparable tools out of the water, you’ll want to “tote” this mixing blade with you everywhere.

Watch a demonstration of the Even Mix™ IBC Tote Mixer at work on our YouTube channel.

We offer Even Mix™ blades for IBC’s, 55 gallon drums, and 10 and 5 gallon pails.  Whatever your mixing need – we’ve got you covered (mixed, blended, whatever you prefer!)

Click here to see the spec sheet and learn more.