Anyone who stores materials in an IBC tote knows that it can be difficult to maintain the quality and consistency of the container’s contents over time. Also, should you need to mix two or more ingredients mixed together, the typical process involves transferring the ingredients through multiple vessels before it lands in the IBC container—which is time-consuming and expensive.

Even Mix’s IBC Tote Mixing Blade is the perfect solution for maintaining the integrity and consistency of your IBC container’s contents as well as acting as a mixing vessel, saving you the time and money that’s traditionally involved with custom mixing machines.

This is a revolutionary mixing blade design that’s taking the market by storm. This patented mixing blade technology has the ability to mix everything within your IBC easily and efficiently. The powerful geared motor can power through even thick materials and the foldable blades make it easy to fit into even the smallest of heads.

In this article, we’re going to tell you everything you need to know about the Even Mix IBC Tote Mixing Blade and why this tool should be on everyone who deals with IBC totes wish list. 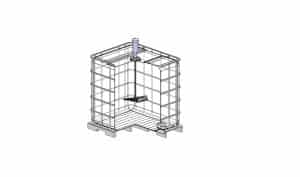 The Even Mix IBC Tote Mixer is a heavy-duty, powerful, and lightweight mixer that’s designed to handle even your most challenging mixing situations. The best part is that this product is lightweight enough for one person to use it easily. In fact, the entire unit weighs just nine pounds—that’s a fraction of what competitor’s mixers weigh.

This mixer is designed to provide an even distribution of materials all throughout an IBC tote. The Mixed Flow Blades are completely unique and revolutionary in their design and shape. These blades fold together to allow easy insertion through the IBC’s 6” top opening. Once the blades are inside the tote, they unfold to perfectly mix the contents of the IBC container.

This patented technology features a blade that’s larger than competitors—it’s 16 inches unfolded. A blade of such size is possible thanks to the foldability of the design. Otherwise, a 16-inch blade would never fit through the 6-inch IBC opening.

The Even Mix IBC Tote Mixing Blade is for anyone who uses IBC totes for storing or transporting materials, or for anyone who desires to maintain their products consistency over time and who wants to deliver a product that’s consistent with its formulation.

Anyone who has a product that needs to be mixed can skip the costly and time-consuming steps of utilizing highly specialized mixers and transferring their product around before settling it into an IBC container. Instead, products can be mixed together right inside the IBC tote with this revolutionary design.

If you’re tired of trusting the quality of your product to poorly designed systems that aren’t allowing you to maintain the quality that you demand, the Even Mix Tote Mixing Blade is the perfect solution. 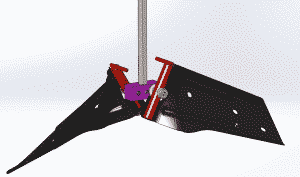 Thanks to the patented technology that Even Mix uses on their mixers, you can experience liquids that undergo vertical mixing better than ever before. The mixed flow blade reflects NASA based engineering for optimum performance throughout the mixing process. That means that this technology actually IS rocket science.

There are two main parts of the patent application and they apply to the design itself. One part focuses on the physical description which speaks to the angles of the mixing blades and how they rotate. The second part of the application is based on how the technology was adapted which was based on the aerospace turban power industry. While Even Mix was certainly inspired by the aerospace industry, the superior mixing technology designed specifically for IBC totes deserved patents of their own.

How Does Even Mix IBC Tote Mixing Work?

The Even Mix IBC Tote Mixer has 160-RPM at 90 PSI capabilities, allowing it the power to perfectly mix the entire contents of your IBC–whether that be food, chemicals, or anything in between. The entire tote mixer unit weighs a total of nine pounds, which means a single operator can handle the whole process.

The operator of the tote mixer can easily move the motor from tote to tote OR they can use several different Even Mix tote mixers with a single motor. This feature in and of itself is poised to save IBC tote users hours of work, stress, and money.

Here’s how it works:

It’s that simple to use, and unlike some other companies in the mixing industry, there are no extra hardware or tools required to use the Even Mix tote mixer.

The Even Mix IBC Tote Mixing Blade is capable of mixing materials of all different viscosities. Applications include:

When it comes to choosing and investing in products and services that keep your business running smoothly and efficiently, it’s important that you choose products that you can trust. Even Mix began in 2012 out of a desire to revolutionize the industrial mixing industry.

As of December 26, 2017, Even Mix’s technology is patented by the U.S. government. This means that this technology was recognized as special and unique enough to deserve to be acknowledged and protected.

The team at Even Mix is dedicated to helping IBC tote users achieve their highest quality product without the hassle, frustration, and financial burden of traditional mixing methods. Phil Rankin, President of Even Mix, is highly involved in the entire process. In fact, when you call Even Mix for more information, you’ll be directed to speak with Phil directly.

From a high-quality, revolutionary product to a dedication to customer service that’s unparalleled, it’s easy to see why Even Mix and their innovative technologies are taking the mixing industry by storm.