IBC Tote mixers also referred to as IBC totes are commonly used containers for liquid distribution. However, the product line for any given brand or even across the entirety of the industry is pretty diverse. That said there are a number of issues often associated with IBC tote mixers in general but one of which happens to be inefficient impellers or a mixing blade that isn’t sufficient. On budget models, for instance, some important IBC tote mixer features may be compromised. Then there is also the fact that these mixers are incredibly heavy weighing upwards of 30 lbs.

The other perhaps most common problem with many IBC mixers is that they don’t seem to do as good a job of mixing various liquids as they should. Speaking of mixing it is often a two-person operation, which is a drain on a business’s resources. Fortunately, a new generation of tote mixers led by brands like ours i.e. Even MixTM is changing things for the better.

In this article we’ll look at how Even Mix’s IBC Tote Mixers are changing the game so to speak, making them one of the most desirable mixing machines today.

The average tote mixer features an all-metal design for the most part, which makes it incredibly challenging to move around but ensures durability. As mentioned earlier, their (IBC tote mixer) bulky construction using stainless steel adds weight with some weighing as much as 100 pounds. So, when it’s time to move them, it will either have to be done by two people or will require a forklift.

However, Even Mix’s IBC Tote Mixers are lightweight and can be handled by a single person. The Air Drive Mixer weighs just 9lbs, and their Electric Drive Mixer just 12lbs. The weight includes everything, i.e. the shaft, mixers, and drive motor. However, despite their lightweight, the tote lid mixer does not compromise on mixing efficiency. In fact, the technology built into them allows for more efficient and thorough mixing.

Many of the latest toe mixer models have a variety of features, ranging from varying speed to other options that can make the mixer more versatile. However, many if not most of these mixers use a particular set of mixing blades which limits their ability. Often it is an inefficient design, which means for the drive to effectively mix high viscosity liquids they will need to run at very high RPMs. The drawback to this technology is that it injects air and sheer at these high speeds, which may not be desirable in many industries.

On the other hand, the patented Even MixTM, a Mixing blade designed by a former NASA Engineer is able to perform better with less power in the container. The new blade is considered revolutionary, and a result of hundreds of hours of testing and design.

The air drive as it’s called consumes just 13 Cubic Feet per minute of air at 90 psi. In other words, you don’t have to worry about injecting air into the product.

A Simplistic Approach to Tote Mixers

Many traditional IBC tote mixers many features that are now considered “standard”. However, they add a layer of additional complexity with numerous connections offering variable speed, and attachments. More complexity also means that many things tend to go wrong, and that’s why these mixers are considered unreliable.

Even MixTM takes a more simplistic approach to tote mixing technology. The company has spent lots of time and consequently money on creating special mixing blades along with our air duct technology to make the mixers simpler. The resulting system offers variable speed and all without needing a separate unit.

How Does Even Mix’s Tote Mixer Work? 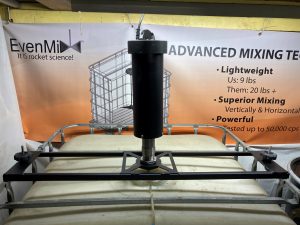 Even MixTM has designed a tote mixer that ensures an even distribution of all materials throughout all IBC containers. The star of the show has to be the uniquely designed and shaped Mixed Flow Blades that do the heavy lifting in all types of liquid-filled IBCs. The blades can be folded making them easier to insert through a 6-inch opening and just as easily unfolded inside to mix the contents. If anything the folding blades tend to slash a few minutes of work from the process.

Once inside the IBC, the large 16-inch blades will unfold, and be ready for the mixing process. However, the company also sells fixed blade mixers for the 55-gallon drum (bulk container) mixer that’s available with both two and one set of blades.

The second blade is an inverted blade that when added, pumps down the liquid that’s lifted up by the blade on the bottom. What this results in is a highly effective pumping action that ensures a thorough mix. It also shortens the time it takes to mix many liquids as compared to using a traditional alternative tote mixer because there is no need to create a vortex to mix the liquid. The pumping up and down action creates better circulation to ensure an even mix inside the container around the corners and at the bottom.

Superior Tote Mixers are the Future of Industrial Mixing

As a business owner in the market for an IBC tote mixer with features that benefit you, there are two options out there. You can either buy a traditional mixer that ends up being heavy, more expensive, and difficult to maintain or buy one that uses innovative patented blade technology for a more even mix.

Even Mix’s solution is simple, with fewer parts and even fewer things that can potentially go wrong. Plus, users can mix and match their drives with the mixers or the drum they are using. It is a flexible system that pays dividends for many businesses in terms of time, energy saved, and a favorable outcome of the mixed solution.

Furthermore, Even Mix’s superior customer support for tote agitators or mixers is second to none. Everything from replacement blades to drives and other parts is easily available. So, businesses save time and consequently money by choosing a company that manufactures and designs all their own stuff.